« We are not mercenaries, as some people are calling us. »

« We love our country and we are always proud to defend its colours. »

« We were really disappointed with the results at the World Cup, which was contrary to our personal objectives, » Njitap said in Yaounde.

Njitap was testifying at an inquiry set up to find out the causes of the Lions’ poor performance.

The inquiry panel, chaired by the minister of youth and sports, Pierre Bidoung Mkpatt, said the players’ strike in Paris, over unpaid allowances, was a major cause of Cameroon’s first round exit.

The panel said the poor selection and administrative lapses also played a role in the Lions’ failure.

Cameroon, grouped with Ireland, Saudi Arabia and Germany, were expected to lead the African challenge in Korea and Japan. 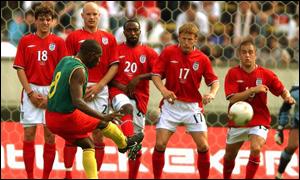 Geremi admitted that the Paris strike did not endear the players to the Cameroonian public, which expressed their unhappiness over the incident.

The inquiry recommended that the team and its administration be restructured, while a code of conduct be drawn up for all members of the national team to sign and adhere to.

» I hope we have learnt our lessons, so that in future we don’t commit similar errors, » said the Real Madrid player.