Visions and vestiges of Stadiums in Cameroon – Bamenda: « Welcome to the Mankon Municipal Stadium »

The stadium of Bamenda is one of the oldest in Cameroon. In the absence of reliable files, it is believed its construction took place during the 1960s. At the time, it was one of the projects by the municipal department of public works to promote the sport in Bamenda. That ambition kept growing until the setting up of a team of football, Public Work Department (PWD) of Bamenda. But, today, the value of the favoured club of the North-West is mixed with the lamentable state of its stadium.

« Mankon Stadium » is not any more what it once was, with the passing of the years; considerable deterioration has transformed the mythical stadium into a fossil.

« Commercial Avenue »; is the well known place where one can easily feel the pulse of Bamenda. Here, in front of the vast and unusual stores where the Nigerian syndrome of counterfeit goods is common, in a sparsely traveled back corner of a splashy looking building, one finds the offices of the delegation of Youth and Sports, which are next to those of the provincial league of football of the North-West. Not far from the building of Chief Issa Bongam who supports the local team.

On the other side of the broad roadway, within about 200 meters of walking distance, is the municipal stadium of Bamenda. On the archway which is the principal entrance, the Cameroonian hospitality is visible: « Welcome to the Municipal Mankon stadium ». But, such pleasantness quickly disappears with the reality of the condition of this temple of football.

This principal entry is used as a means of communications, within easy sight of the number of passers-by or tradesmen who are in the neighbourhood. Its wall is dirty, still containing what is left of the posters that are placed there the day before each sporting season or event.

The interior is not any better. The walls of breeze blocks have at least taken the place of sheets and containers which surrounded the stadium before. But, like the saying goes, as soon as you drive out nature it returns even quicker. What is used as a wall of the stadium is broken up in certain places. One part of the wall fell down, at the beginning of season, following a storm which struck the city « At that time no one envisaged building reinforcement to the wall. And today’s deterioration is due to the absence of reinforcement at the time when the wall was built », tried to explain the stadium’s director, Richard Mbaku. Later another storm which was even windier shredded and carried completely away the roof of tribune « A ».

The field of play itself is not anything but a potato field, where, in some portions, weeds and wild grass grow alongside the turf. With noticeable holes in some places, the field of play of the municipal stadium of Bamenda, whose dimensions are difficult to determine, does not give a chance to the footballers to fully develop their talent to reach the level of the Indomitable Lions. This is the kingdom of stagnant water and it’s batch of small beasts and other potential microbes.

Behind one corner, is some undergrowth where the isolated scoreboard in the colors of Brasseries du Cameroun is located and where the local population generally comes to feed their cattle. The athletics track is not usable due to lack of sufficient lanes. In places, the track is sometimes rough and contains bits of metals which reminds you that this is not a good place to run. The two team benches are not covered. The official’s section is non existent. A table and two chairs from the area generally take the place of something more formal.

Well before the beginning of the current season, some work had occurred at the Bamenda municipal stadium. But that had been limited to placing a weak netting intending to separate the field of play from the boisterous fans of Bamenda. They also built a four roomed building with toilets which was called « the changing rooms », all of which was done beside the basketball court. In front of these are one to two fragile kiosks supposedly designed to be broadcast rooms for the many radio stations which are scattered across the North-West.

Let us note that these « changing rooms » which should also house the stadium’s officials and director are not even opened yet. This work with a budget of 15 million, which was very much requested by the directors of the stadium, also made it possible to rehabilitate the two handball courts, whose deterioration was evident. As to the announced construction of a tennis court and a gymnasium, one must simply cross your fingers. Flood lighting is not even considered here, why should it be here in Bamenda when there is not any flood lights in any of the republic’s stadiums, I would say to you.

Challenged on the causes for the continuous deterioration of Bamenda’s stadium, its director speaks about « overuse. » It does not help the survival of the grass which the stadium’s directors would try and plant at times « This is the only sporting location of the state which is available to all the large towns of Bamenda, » explains Richard Mbaku.

This is the ground that PWD, the emblematic team of the department, trains on. But in addition to PWD the city’s three teams in the second division also train there. This sporting complex is also used for the competitions of Fénasco (Fédération nationale du Sport scolaire). More than twenty groups from the city’ s population participate in various sporting events here. « Those participants will even climb over the fences in the morning and evening when the gates are closed, » explain the stadium’s director.

The professor certified in EPS (Éducation Physique et Sportive) with a specialty in football and an ex football coach thinks that the government would benefit from building additional sporting structures in Bamenda. And he thinks it is a shame that the spectators no longer attend the stadium. Consequently, the gate receipts are minimal.

« Last year, PWD went nearly six matches unbeaten, contrary to this year where the defeats have accumulated. » The players aren’t getting paid. « The public knows about all of these problems, they are well informed and one way or another they become discouraged, » explained Richard Mbaku. He is also surprised by the scheduling of the First Division matches and said that here in Bamenda, there is little interest in the Second Division.

When you leave this area, it makes you ill to think that such a dynamic and rich population (in all aspects) like that of Bamenda and its surroundings (without counting the Diaspora) can lack so much infrastructure. Isn’t this history of horror repeated elsewhere within the country of Roger Milla, Patrick Mboma and Samuel Éto’ o? If you do not know the answer now, you will know it soon and will see it in our next destinations.

3. The official seats; the storm often passes by there

4. Wild grasses at some places, ideal for the cattle

5. Here is the Basket ball field for the "sporting complex" 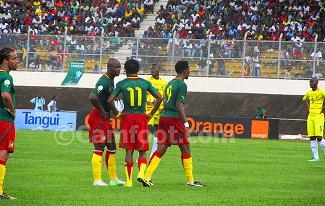 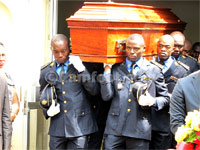 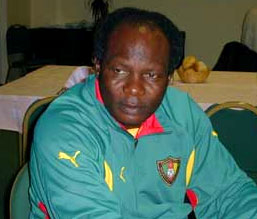 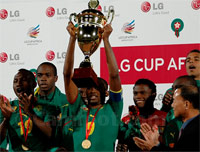 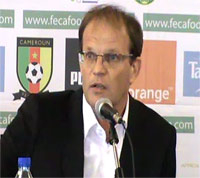